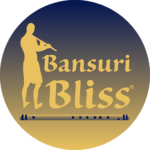 The mission of Bansuri Bliss is to be the world’s premiere source of bansuri knowledge and inspiration.

We are here to help you unlock the mysteries of the classical music of northern India! This site is rapidly becoming one of the most amazing bansuri websites in universal history: we know you’ll love it! As we add lots of content to it, please be sure to:

I’ve played bansuri almost every day since 1996. I grew up in the suburbs of Northern Virginia in a non-musical, non-Indian family and I never studied music until I was 21 years old. I was inspired to play flute in 1995 when I heard the melodious sounds of a flute while traveling through the Greek isles. The flutist told me that if I wanted to learn the flute, I needed to learn the raga (the Indian classical music form). I had recently heard the great sitarist Pandit Ravi Shankar so was familiar with Indian music and knew that it was based largely on improvisation. Being a huge fan of improvised music, I took the flutist’s advice and started researching how to learn bansuri.

I found out that San Francisco was the center of Indian music outside of India, so after I graduated college, I moved to San Francisco to begin my Indian musical journey (online courses didn’t exist back then!). I intended to take just two months of bansuri lessons in order to pick up the basics. But I fell in love with the instrument and the pleasures of learning Indian classical music, and bansuri has been a major part of my life ever since.

In 1999 I returned to Virginia to learn bansuri from the great flute master Pandit Vijay Raghav Rao, who had studied under and collaborated with Pandit Ravi Shankar for thirty years. Vijayji spent half of each year in Virginia, so I always tried to be there when he was there. A few summers he spent in southern California, so I spent those summers in California as well, taking as many lessons as he had time to give. Vijayji was born in India in 1925 and spent his entire life composing, recording, performing and teaching Indian music. I was fortunate to receive private lessons from him from 1999 through 2008, and he once told me that he had taught me more material than any of his other students (who include GS Sachdev and Ronu Majumdar). One of my major goals is to share with you the wealth of knowledge that Vijayji passed down to me, and to ensure the world is filled with more and better bansuri music.

Aside from bamboo flute, I’ve studied tabla (Indian hand drums) and electric guitar. I’ve taught myself piano, ukulele, and jaw harp, and I am quite adept with a darabuka (middle eastern drum). I’ve attended hundreds of concerts, including those of legendary musicians such as Ali Akbar Khan, Ravi Shankar, Hariprasad Chaurasia, Amjad Ali Khan, Shivkumar Sharma, Zakir Hussain, Anindo Chatterjee, Ramani, L. Subramanian and of course my guru Pandit Vijay Raghav Rao, as well as plenty of rock and roll, jazz, funk and other western music. And I’ve recorded, performed and practiced with a variety of musicians from around the world.

In 2008 I built the Indian Flute Music website and started sending out regular electronic newsletters about bansuri. In 2013, I began uploading music lesson videos to YouTube and giving private and group lessons online and in person. In 2017, I founded Indian Flute Music LLC and in 2018 re-branded the business as Bansuri Bliss, as bliss is what well-played bansuri often brings the musician and the audience.

My 20+ years of musical study and teaching (combined with significant experience teaching math and science from the elementary to university level) enables me to pass information on to my students in a clear and concise manner, and to quickly see ways they can improve their music.

Enter your email to receive bansuri education and event announcements.

Open chat
1
Powered by
Namaste Flute Lover!
You can send us a message via WhatsApp by clicking the button below. We suggest including your name and email address.